Build an entire Power Platform vacation-booking app, from scratch, in less Than 90 Minutes Per Day (for 5 days). Actionable Lessons & Live Coaching. You can also complete the Challenge in your evenings, meaning you don't need time off work!

As we live and breathe “Microsoft” on the Collab365 Team, I knew we had to adopt Teams as soon as possible, so I moved Collab365 over in a weekend.

At the time we switched, we were already significant users of Slack (collaboration), Skype (meetings), Trello (task management), and SharePoint (document management).

On the face of it, moving Slack to Teams, Skype to Teams meetings and Trello to Microsoft Planner was just a like for like replacement.

It should be easy peasy!

By the end of my “Teams migration weekend”, we still had some remnants left in Slack and Trello, but I’d copied over most of the important “stuff.”

I was pretty pleased with my weekend’s work!

On the Monday morning stand-up (in Skype), I was really excited to announce the switch. I (wrongly) assumed the Team would be as enthusiastic as me!

As soon as I began to announce it, I was met with RESISTANCE:

I could go on.

The meeting was actually pretty heated and embarrassing for me.

I’d made a BIG mistake.

Even though we could still perform our various roles in Teams, I’d not counted on the human element of doing such a migration without “buy-in”.

Why wasn’t my migration successful?

1: No one likes change!  (They can like what change will give them though): It turns out that us humans actually don’t like “change”. After all, change usually means unlearning what you’ve learned. When I was chatting with Rob Bogue recently, (my “Go to expert” for change), he explained that we will even go to great lengths to resist change just for the sake of it. Crazy huh!

2: I didn’t get “buy-in”: If you’re going to make such a drastic change to a person’s day job, you need to make sure you warm them up and sell the benefits to them before introducing any change. No one likes a dictator, so you will often find resistance when a decision is “pushed down”.

3: No training: It turns out, even though I thought I’d introduced direct replacements or workarounds, some things still took longer. MS Planner was also pretty “buggy” and was nowhere near as good as Trello in those early days.

If I was to replace Slack with Teams now, what’s my advice?

Firstly, at the time we were a company of just 7 people. (3 devs, 2 product managers, 2 marketing). This is a small team, but we STILL had significant issues with the roll-out.

I haven’t worked in a big organisation for over 8 years, but I can appreciate how something like this could go badly wrong if it’s not done correctly!

Rob Bogue has helped multiple organizations with large-scale rollout’s. He’s obviously better placed to comment than me, so I asked for his opinion.

1: Get clear on the end state – Explain to all the key stakeholders and groups of users how their jobs/roles/lives will be better as a result of the change and “why” this is the case?

2: Found out what’s in it for them – As the driver of change, don’t focus on what you want from it. Instead, flip the script and think about the eventual users and clearly articulate what they are going to get out of it. Focus on how their lives are going to be better.

3: Support and train them – How do you make sure they have the training and support tools they need to be effective.

If you don’t have a change management program, or user adoption strategy, your end-users will likely resist the change. This means that you won’t ever maximise the ROI on your investment.

If you’d like to learn precisely how to ensure that your next big roll-out is a rip-roaring success (or fix a broken roll-out like ours was), we’re also running a workshop presented by Rob Bogue MVP. A half day online with Rob could be just what you need to make sure your Microsoft 365 roll-out doesn’t go the same way as mine did 🙂 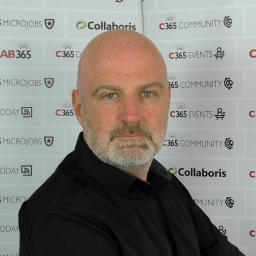 I want to provide a friendly online community, where we can learn and grow together:

Master Office 365, Power Platform & SharePoint & Teams With 200+ Hours Of Training Videos and 108 Ebooks in the Collab365 Academy. This offer is insane and is only available for a limited period.